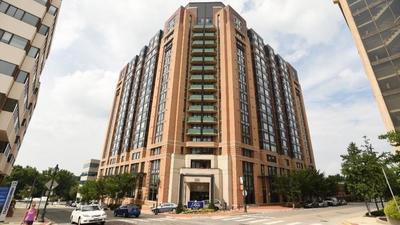 The suburbs have a familiar routine: If you need to get somewhere, hop in the car and drive there. Two errands? You’ll be driving to that second destination, too.

But what happens when a suburban center, filled mostly with office buildings, starts to look more like a densely populated city, more urban? Towson is finding out.

Towson Row and Avalon Bay, two construction projects in Towson’s core, are set to add more than 500 apartment units. Also under construction is 101 York, a student housing building that will add hundreds more. The population of the area, less than one square mile, is skyrocketing.

“We’re going to be like a little downtown,” said Nancy Hafford, director of the Towson Chamber of Commerce.Just over the past couple of years, Hafford said she has seen a shift: from a suburban outpost to a more urban community.

According to Matthew Bell, a professor of architecture at the University of Maryland specializing in urban design and planning, the difference between a crowded suburb and a livable urban area is all about getting people out of their cars and walking the streets.

“Just because you have density doesn’t mean you have good urbanism,” Bell said. “You have to have streets that are worth walking down to make it worthwhile for people to go there.”