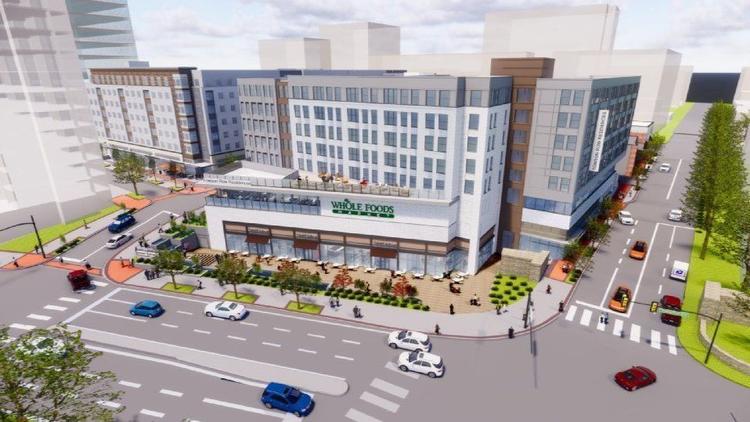 A planned building anchored by Whole Foods in central Towson will feature a plaza with outdoor seating and retail space, a terrace accessible to student housing residents and a modern neutral color pallet, the project’s developers told a Baltimore County panel Wednesday night.

The project on the corner of York Road and Towsontown Boulevard had to make significant changes from previous designs in order to lure in Whole Foods, which had been announced as the anchor tenant years ago but pulled out of the project, said officials from developer Greenberg Gibbons.

Whole Foods to anchor Towson RowIn a presentation that spanned more than an hour, Greenberg Gibbons expressed excitement and relief at locking down the Whole Foods deal, which was announced in April.

“Whole Foods is the quintessential retailer of the future,” said Eric Walter, executive vice president of acquisitions and development at Greenberg Gibbons.

In addition to the 45,000-square-foot grocery store, the building is set to create 10,000 square feet of retail and restaurant space and about 220 student housing units above, said Venable attorney Christopher Mudd, who represents the developer.