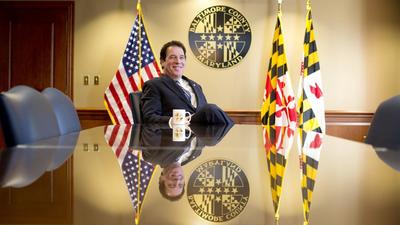 In January 2013, Baltimore County Executive Kevin Kamenetz declared that he wanted to put Towson on the map.

“We are going to make Towson a regional destination, even better than Bethesda, even better than Silver Spring,” Kamenetz, a Democrat, said during an announcement about Towson Square, an $85 million development of a cineplex and restaurants in downtown.

As the county reacts to news that Kamenetz died Thursday of cardiac arrest, some Towson residents look at the changing skyline of Towson’s core and see Kamenetz’s handiwork — and can recall the mix of support and controversy that often accompanied it.

“I’ve been here for 30 years,” said Towson Chamber of Commerce director Nancy Hafford. “And because of Kevin’s commitment to our community, this town totally changed. It went from a dead town, an old tired town, to a young, vibrant [town] where people are on the street day and night.”

“It’s definitely a changed place from when he took office,” said County Councilman David Marks, a Republican who represents Towson.