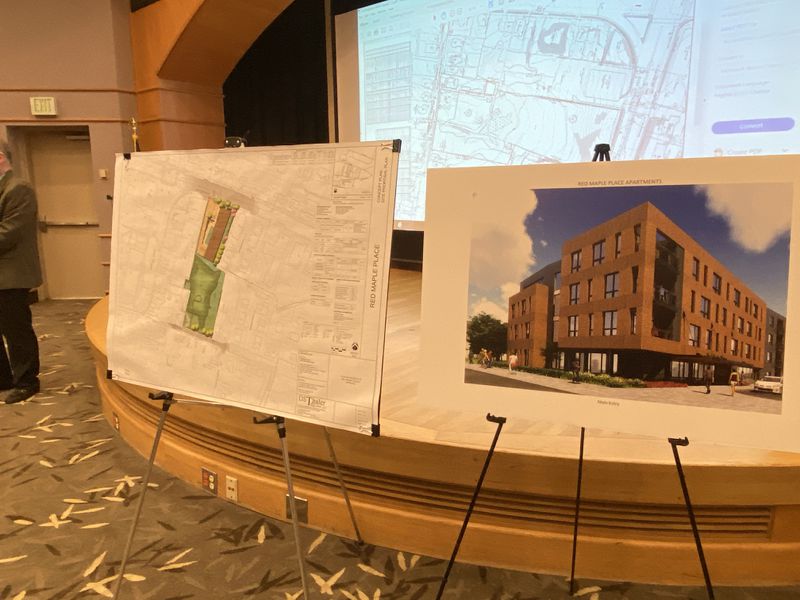 Neighbors of a proposed affordable housing development in East Towson voiced concerns at a meeting Oct. 29 over a range of issues, including increased traffic, what they perceive as the project’s aesthetic shortcomings and an anticipated loss of trees.

As proposed, the Red Maple Place project would create 56 affordable apartment units — 22 one-bedroom units, 17 two-bedroom units and 17 three-bedroom units — on a 2.5-acre plot of land between East Pennsylvania Avenue and East Joppa Road, off Fairmount Avenue. A rendering of the project shows the building with one terrace level and three stories above that.

The entrance and exit to the complex, as proposed, are both on Joppa Road. The project calls for 87 parking spaces, with most in an underground garage.

The project is bordered by East Towson, a historically black neighborhood, and Harris Hills, a complex of condominiums.

Michele Yendall, who sits on the Harris Hills board of directors, said during the community input meeting on Red Maple Place that traffic in the area, especially along Joppa Road, “is already horrendous.”

Adding more than 50 units that could be accessed only from Joppa Road would exacerbate traffic problems, she said.

A rendering of the building, which showed dark brown and black colors on its siding, was also a concern for Yendall. Residents of Harris Hills currently have a view of a small wooded area that would be lost if the proposal moves forward.