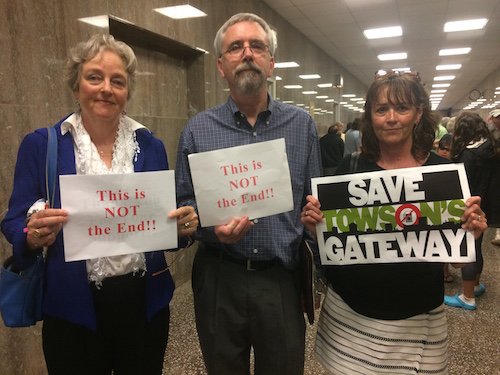 In a huge blow to community activists who had fought the project, the Baltimore County Council on Monday voted to table a bill that would have stopped development of a large gas station at the corner of York Road and Bosley Avenue. The vote clears the way for developer Caves Valley Partners to build a 24-hour Royal Farms at the site.

A gas station is not allowed by the area’s zoning, so developer Caves Valley Partners applied for a PUD (Planned Unit Development) to avoid having to comply with the zoning. Despite strong opposition for adjacent neighborhoods, in December 2016 Marks approved moving the PUD forward for review.

“This vote means the majority of the County Council is run by developers — it’s a culture that is incredibly disturbing,” state Sen. Jim Brochin, who is expected to run for County Executive in the next election, said in an interview after the meeting. “Developers feel like they can do whatever they want because they’ve bought out a majority of the council. It’s enough. It’s foul.”