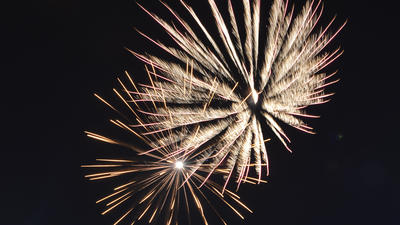 A 20-minute fireworks display lighting up the skies is a tradition of celebrating America’s birthday in Towson.

With less than two weeks to go until the big display, about $7,500 is needed to make sure Towson’s annual July 4 fireworks at Loch Raven Technical Academy will go off this year, according to organizers.

“People don’t understand it’s all privately financed, and it’s all volunteers that put it together,” organizer Jason Garber said. “People assume county government or the fire department puts it on, but that’s not the case. “The need is not new, Garber said.

The Towson tradition was started by Luskin’s, a discount appliance store that closed in the mid-1990s. After the closing, the former Loch Raven Business Association, Kiwanis Club of Loch Raven and Loch Raven Community Council all tried hosting but passed the event on to the Associates of Loch Raven Village.

All the groups cited difficulty in raising money for the roughly $10,000 production.

After more than 15 years, it was handed off again to the Greater Loch Raven Recreational Council and the Greater Towson Council of Community Associations in 2015. The groups put their first event on in 2016.