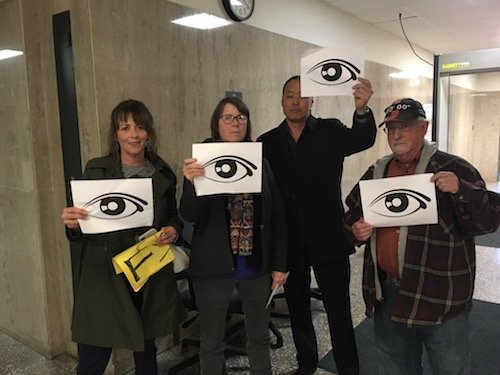 April 16, 2018 UPDATE: At a meeting that turned into a shouting match, the Baltimore County Council on Monday evening approved the sale of the 4.6-acre site at York Road and Bosley Avenue to Caves Valley Partners.

Moments before the vote, Councilman Wade Kach said he had received a copy of an email between a county employee and a Caves Valley attorney from last year in which they discussed which trees the developer wanted removed from the site. The trees were later cut down at taxpayer expense despite the fact that the site was to be sold “as is” and the county council had passed a resolution saying the trees could not be removed.

However, the other council members were nonplussed by the news.

“I don’t think there was any issue at all or question as to who removed the trees and why,” replied Council Chairman Julian Jones. “It had to do with a change in the price and a negotiation that took place. We’re not going to get into all that.”

At a council meeting in April 2017 — two days after the trees had been cleared — there was a testy exchange between Councilman David Marks and Fred Homan, the chief administrative officer for the Kevin Kamenetz administration. Marks said he was upset that neither he nor anyone else had been notified that the trees were to be taken down.