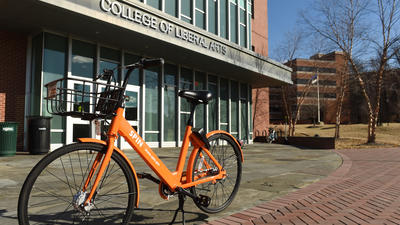 Towson University and Goucher College students have a new option for getting around campus that some residents of neighboring communities hope will relieve some parking congestion in greater Towson.

San Francisco-based Spin held soft launches of its bike-sharing program at both universities last week. The pilots are meant to gauge ridership before a potential expansion in the spring, according to company officials.

About 100 of the company’s dock-less, bright-orange bicycles were distributed throughout Towson University’s campus on the first day of spring semester. Another 30 were placed around Goucher College.

The institutions’ bike share company of choice works differently from companies such as Baltimore Bike Share by allowing users to return bikes anywhere, rather than at designated stations.

To ride, users search for an available bike through the Spin app, which uses GPS trackers to locate nearby bikes. The system uses a cellphone application to both lock and unlock bicycles at the user’s destination of choice, according to Pamela Mooney, Towson University’s director of parking and transportation.

“I thought we’d be slower on people using it, but the first day they were out there people were using them,” Mooney said.